Netflix’s Dark returns for Season 2! A thriller, Dark is a supernatural series focusing on time travel and supernatural creatures. Dark is the first German Netflix Original.

Set in Winden, the series focuses on the disappearances of kids and its consequences on the town. The series has received a lot of critical acclaims. People say it is a German version of Stranger Things. A much better version. Let’s decide for ourselves!

The series has received such a good response that Netflix announced Season 3 soon after the release of Dark Season 2.

We watched it and absolutely loved it! What about you? Liked it? Worth a watch?! 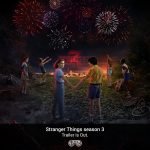