After unveiling the teaser poster, Ekta Kapoor‘s digital platform ALT Balaji has released the first look poster of Ragini MMS Returns web series. The lead actors’ identity was kept a secret with teaser but we finally know who are the faces that will take us through the show.

In the poster unveiled, Karishma Sharma and Siddharth Gupta are posing topless, while a figure of a woman in red saree is looking over them. While this takes the show’s glamour quotient through the roof, you can expect it to be following the footsteps of 2011 movie, Ragini MMS. The show is going to be full of twists and turns while spicing things up, just like its movie franchise.

The actress Karishma Sharma is known for her role of Raina (in TV Show Ye Hai Mohabbatein) and she also appeared in Luv Films’ web series, Life Sahi Hai. Siddharth Gupta made his debut with Ekta Kapoor’s 2014 movie, Kuku Mathur Ki Jhand Ho Gayi. He was also rumoured to have landed the lead role in Guy Ritchie’s remake of Aladdin.

While we wait for the release date of Ragini MMS Returns, check out some spooky promotional posts by ALT Balaji for the show. What do you think of the new cast and new format of this franchise? Let us know on our socials! 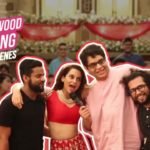