The thing to notice here is that the intersection of all three nominations is Anurag Kashyap, who is one of the directors of Sacred Games and Lust Stories. While announcing the nominations on her Instagram stories, Radhika Apte also credited Kashyap for the great work and opportunity.

While the recent release season 2 of Sacred Games has received a mixed response, it still remains one of the great things to come out from the Indian productions of Netflix. It has been nominated alongside the shows like Contra Todos, Bad Banks and McMafia.

With Lust Stories, Netflix unveiled a whole new concept of four different stories directed by different artists under a common theme, which has received a great response from critics and fans alike. It packs phenomenal performance by actors like Radhika Apte, Vicky Kaushal, Manisha Koirala, Kiara Advani and Bhumi Pednekar.

Another nomination that India has grabbed this year is by Amazon Prime Video original reality show, The Remix. It has been nominated for best non-scripted entertainment. It is a music reality show where teams of music composer and singers come together to bring original music live. The show dazzles with the legend Sunidhi Chauhan, desi dance music powerhouse Nucleya and the maestro, Amit Trivedi as judges. 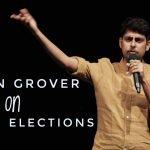